Cosmos in Kameoka: In the trail of autumn flowers

﻿
﻿
Kameoka city is about 30 minutes away from Kyoto city by the Japan Railway rapid train.  It is located in the Tamba region of Kyoto prefecture, a region hailed as the "roof" of the prefecture due to its mountain ranges. A quiet city with a flourishing agricultural industry, Kameoka is worlds apart from Kyoto city. The train ride brings you through valleys and rivers and it is a good place to go for nature lovers.
Some months ago, I read about the Tamba-Kameoka Yume Cosmos Park in the city where 8 million cosmos would bloom in autumn.  The pictures I saw of the flowers were beautiful and I found myself looking forward to that day in autumn in which I would stroll through the fields of cosmos.  And on 20 Oct, in spite of the loads of homework from school, I  found time to make the trip to the city.
﻿ 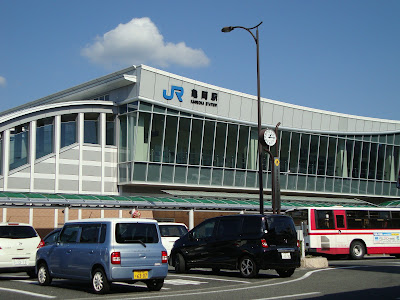 Upon arrival at the JR Kameoka station, I took the Keihan Kyoto Kotsuu Bus no. 40 (from Bus-stand number 3) at the bus terminal in front of the train station.  Unlike the Kyoto city bus in which there is a flat rate of 220 Yen as long as you are travelling within the city, the Keihan Kyoto Kotsuu Bus fare is calculated according to the distance travelled.
When you board the bus, you need to collect the ticket from the ticket machine near the door of the bus.  There is a number printed on the ticket. To know how much to pay when you alight, you need to pay attention to the fare display in front of the bus (see picture in the extreme left of the photo collage below).  If you look under the number display that corresponds to your ticket number, you will see the fare indicated in red numbers.  As my ticket number states "1", I looked under the display under "1". I paid 250 Yen for the trip from the JR Kameoka station to the Kameoka Undo Koen where I alighted. 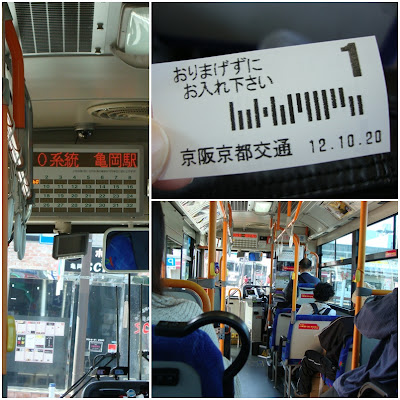 The Kameoka Undo Koen bus-stop where I alighted is just across the road from the cosmos park.  Once I alighted, I could see the fields of flowers before me.  There were people photographing the flowers from outside the park.  Entry to the park required an admission fee of 600 Yen.  There was a discount coupon for weekday use only which could be downloaded from the website and you could save 100 Yen with it. 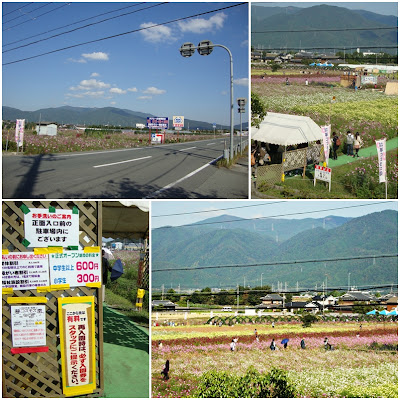 Since I came all the way and spent about an hour travelling just to get to the park, I was determined to enter the park. Although it was a Saturday, there were not as many people as I had thought. It could also be because I went around lunch-time.  It had been raining quite often that week and I was glad that the day was blessed with great weather. The sun was at its strongest but it also meant that I could get pretty good photographs. 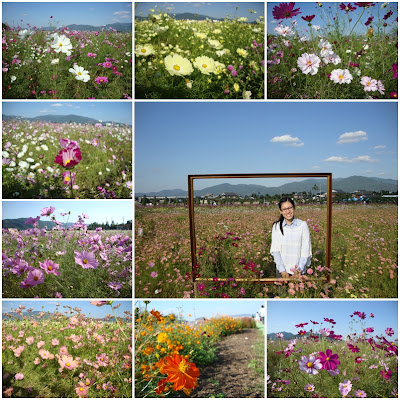 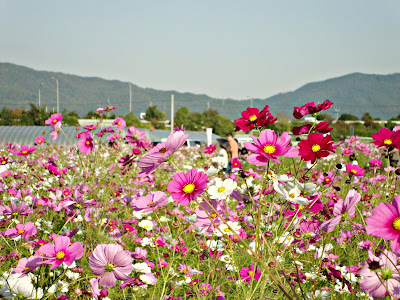 The flowers started to bloom around the end of September and the flower viewing event was originally scheduled to end in end October. However, it has been extended to 4 November.  When I went there, I could see that there were still many flowering buds so I guessed there were still many "late-bloomers".  When I left the park and Kameoka, I had the feeling that there is more to discover in this city.  I will definitely find time to visit Kameoka again.
Posted by S.H. Chan at 19:07

S.H. Chan
There were dreams from my younger days which were left unfulfilled, among which include experiencing life in Japan and mastering the Japanese language. So here I am, in Kyoto.